The Turkish Lira continues to plummet at a fleeting rate since the turn of the year, and economists state that there is no visible turnaround from the deplorable currency crisis, in the near future. Lately, after lira notched its nadir, owing to the global pandemic and partly to the poorly planned economic policies, the Turkish government and the Central Bank of Turkey (CBT) were quick to respond and claim that financial recovery has picked up pace. However, it remains no secret that rapidly rising inflationary pressures, large amounts of foreign currency-denominated debt and corresponding loan defaults amalgamated with rising fascism and maverick financial policies have exacerbated the entire issue.

The largest economy in the Middle-East prompted concerns when the lira lost more than 30 percent1 of its value in less than a year. A longstanding attribute of the Turkish economy has been a low savings rate and high current account deficits. With one of the largest current account deficits in the world, the firms and banks of the Ottaman-descendant economy have relied heavily on capital inflows in foreign currencies for funding purposes. Put together, this has weighed on the currency. The Central Bank, which holds just up to $85 billion as gross foreign reserves at its optimistic best, requires more than $200 billion to abate its maturing debt and high current account deficit.

Foreign Direct Investment (FDI) has been declining due to Erdogan, the President, whose rising authoritarianism and actuating political dissent with former allies. In a bid to bring back the former glory of the Ottomans over the Islamic world, Erdogan has turned averse towards the West, including countries like France and Germany, which are the major sources of investment in the state. Moreover, his unorthodox economic policies such as opposing the rise in interest rates in the backdrop of high inflation has caused much stir in the economy. Increasing interest rates is one of the primary tools to grapple with inflation and support the currency. Despite constitutionally granted autonomy, the CBT has heeded Erdogan’s advice, leading to a drain in investor confidence and further sell-off of the legal tender. Furthermore, the countrymen baulked, unsure of the nation’s economic trajectory, when the President named his son-in-law as the finance minister of the country.

The Spat with the United States

In a striking consequence of Turkey’s decision to imprison an American Protestant parson, Andrew Burson, the United States imposed sanctions on two Turkish government ministers. Conservative Protestants form a critical component of U.S. President Donald Trump’s vote bank. This was followed by a series of sanctions and high tariffs imposed on Turkish imports of steel and aluminum. The U.S. was the largest export market for Turkish steel, and this stentorian announcement by the POTUS pushed the lira into free fall, deeply aggravating the economic crisis in Turkey. The equation between these two powerful countries nosedived following concatenation of events including Ankara’s decision to purchase weapons from Russia, US support for Syrian Kurdish forces, and Turkey’s demand to extradite US-based Islamic cleric Fetullah Gulen. With a new low in the foreign relations between the two states, who were NATO allies during the Cold War, Turkey’s future seems to be covered with fog with no sunlight in visibility. 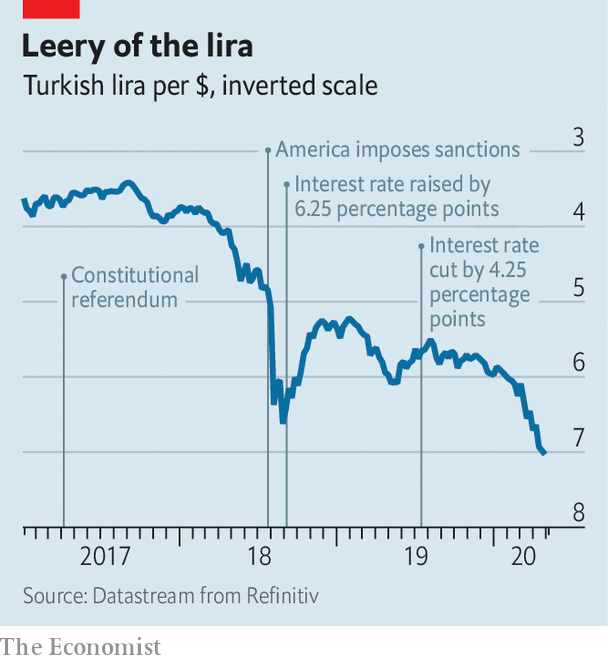 Timeline of the Lira Crisis; Source: The Economist

Consequences of the Crisis

The unstopping tumbling of the currency is a cause of worry for Turkish businesses and firms which have revenues in lira but owe money in foreign currencies such as euros and dollars. As the Turkish lira loses more than 30 percent of its value against the dollar, repayment of foreign-denominated debt, amidst the depreciation of local currency, becomes expensive. This sudden plunge in lira leads to a high probability of bank failures and corporate bankruptcies, which could crumble the economy. In addition to this, the currency crisis has rampantly raised the cost of living for people in Turkey by making imports more expensive. In the environment of already present strong inflationary pressures, this has intensified financial concerns for both the public and the government.

The ongoing financial exigency in Turkey may spill into other emerging market economies. There are doubts about whether European banks will be able to recover their debt from Turkish institutions. Due to low confidence amongst investors owing to loan based losses, the lira dropped to a 12 month low against the euro3 on 10th August, and correspondingly bank stocks fell. The European Union is also dependent on the Turkish Republic to restrain the entry of migrants from conflict rife regions of the Middle East, in exchange for financial aid. Any form of resumption of migrant flows, amidst straining ties, will lead to social, economic, and political clashes in the continent. However, according to leading banks, an economic crisis in Turkey will not lead to losses large enough to trigger a banking setback in the European Union.

Erdogan has failed to inspire confidence among his countrymen after the lira meltdown. Instead of taking calculated decisions, such as increasing interest rates to alleviate pressure on banks and asking the International Monetary Fund for assistance – he is busy banking on nationalistic sentiments and levelling allegations on ‘foreign powers’ who are supposedly trying to destabilize the country. President Erdogan has declared an ‘economic war’ against both the external and internal destabilizing agents. None of this, however, is sufficient to curb the uncontrolled crisis caused by a paucity of foreign reserves and impractical economic decisions. A more stringent and pragmatic action is required to lead the way and soothe markets.

Any cookies that may not be particularly necessary for the website to function and is used specifically to collect user personal data via analytics, ads, other embedded contents are termed as non-necessary cookies. It is mandatory to procure user consent prior to running these cookies on your website.